“Where do you think it goes?”

I gave Amy a puzzled look and replied “I don’t know, maybe it just makes a loop around. Let’s just keep walking and see. It’s easy to follow.”

So off we traipsed in our exploratory boots, so to speak, eager to enlighten our inquisitive minds.

“It will be a beautiful trail once it is cleaned up” quipped Amy, referring to the numerous fallen trees of past winters and wind storms.

“Yup, and look at all those blueberry plants off to the side. This is going to be a great field someday” I dreamingly replied.

“It just ends!!” shouted Amy as I struggled to keep up. Amy has always walked faster than me. “It just goes into the marsh and ends!”

My eyes darted in puzzlement between Amy, the trail, and the marsh, as I tried to  catch my breath and dodge the swarms of mosquitoes.

This is where our mystery began. An old trail that went nowhere…or so we thought. This was a mystery soon to be known as “The Winter Road to Mount Stewart”.

So, armed with burning curiosity and numerous mosquito bites, we journeyed off to see the couple that sold us our soon-to-be-organic blueberry fields, Gary and Edith Vissey. It wasn’t a far journey. They live on the top of the hill. Visseyland, here we come!

Visseyland, with its small farmhouse nestled on a hill amid gently rolling farmland at the east end of the Five House road loop in Fort Augustus, is a perpetual cookie machine. A visit to Gary and Edith’s almost ensures a mitt-full of Gary’s fresh baked molasses cookies and, if the timing is right, some homemade grape or apple jelly. But disappointingly they also didn’t know why this trail went into the marsh. As far as they knew it had been there since they purchased the property from the Kelly’s. The Kelly’s made a bit of moonshine and had a habit of hiding old cars in the woods (which are still there). To investigate further, we would have to dig deeper.

Uncle Chucky? Maybe he knew. He did grow up beside the old Kelly farm. Uncle Chucky is the term we affectionately call 76 year old Fort Augustus resident, Charles Hughes.

Amy had previous plans, so I had to make this visit solo. Charles, my uncle, looked at me as if I had two heads when I asked him if he knew anything about the trail. To me, this reaction was nothing new. Due to my frequent curiosities, this type of reaction happens to me a lot. “That’s the winter road from Fort Augustus to Mount Stewart. People went through there and then up the ice to Mount Stewart to go shopping” he blurted out. “ It don’t look like much now, but at one time Mount Stewart was the place to go. It was like Las Vegas. You could buy anything from candy to coffins there.”

Now my mind was racing and more questions were jumping to the tip of my tongue as a curiosity for the trail started to bubble forth.

“Did you travel on the winter road?” was the first question that I excitedly asked.

“Yup, I used to go up with my father. We waited for a good day. There was no weather channel in those day, so you had to make sure the weather was with you and then you’d go. Once we got on the ice past Black Run, my sled got hooked up to the post of the horse sleigh so I got to glide into Mount Stewart.

He paused for a second and I quickly interjected. “Where did the trail start?”

He smiled at me, clasped his hands together on the kitchen table and continued on, “Well, you see, it was different each time. Where the trail went through the field, I mean. It depended on the snow drifts and maybe the doctor. But generally people from Auburn, Fort Augustus, Tarantum, Donagh and maybe even Watervale, they came down The Line Road (now called The Cape Breton Road), or the Fort Augustus road. Then down past Harry’s (Harry Hughes), they cut across Jay’s field, down behind our place and then over to the Kelly’s. They went between the house and barn, down across the field and into the woods. The trail stayed in the woods until it hit the marsh. Then across Black Run and up the ice to Mount Stewart.”

“The doctor?” I questioned. ”What did he have to do with the trail?”

Again that smile. “The doctor, he wasn’t like doctors today. You didn’t go see him. He drove around in his horse and sleigh and made house calls. If you needed a doctor, you sent for him. He usually was the first to open the trail and others just followed his tracks.”

It was now my turn to smile and clasp my fingers together on the table. “How did he know the trail was safe to travel on?” I asked.

“He didn’t,“ came the reply, “but doctors were the adventurous sort and were adept hands at driving a horse and sleigh. Everyone was then. Charlie Kelly made sure the floating bridge on Black Run was secure and the Hillsborough River was bushed.”

“Bushed? What is bushed?” I questioned, unclasping my fingers and leaning back on my chair.

“It’s more or less marking a safe trail, same as on land. There were lots of springs on the sides of the Hillsborough River that you had to avoid because they were open during the winter. Sometimes they were covered in thin ice or snow so you couldn’t see them. But the ice was very, very thin and you would go in the ice..the water” he quickly corrected. “ So that’s the reason, it had to be ‘bushed’.  You cut young bushes and get them to freeze in the ice. You would have a marker like you would on a road.”

I could see by Charles’ nature and his smiles that he was enjoying my education about The Winter Road. I was as well.

‘Was the road used often?” I asked.

“Yes,” he answered, “You had to get groceries and sell your wares somewhere and Mount Stewart was the place at that time. You could tell who was going to Mount Stewart by the horse. When then horse and sleigh turned off the Fort Augustus Road and started down towards the ice, all of us living down there could see the horse. Horses have different colors and actions, just like humans. So when you saw the horse, you knew who was coming.”

“Anyone else you know that may have travelled the winter road?”

“Sure,” came the reply, “Albert has. Albert Duffy. He travelled that road many a time. He can tell you some stories I bet.”

Now it was my turn to smile.

It is always a pleasure to visit Albert Duffy. The 91 year old Fort Augustus legend is a master storyteller. His family has been farming the same farm since they immigrated from Ireland many years ago. Albert agreed to tour around with me in the car and show me where the trail went. First we went to Mount Stewart so he could show me the house that was floated up the ice from MacKinnon’s Point, which was Gillis’s Point in Albert’s day. He pointed out the landing where each store had a shed for patrons to house their horse while they shopped.

Albert dictated a lot of stories on how farming has changed since his day…I foresee a whole new article about forgotten farming practices on the horizon.

“Albert, do you have any stories about travelling on the winter road to Mount Stewart?”

Here is one of them:

“One morning, I went across the Winter Road, past Jimmy Hughes’ house. I had to go between the house and the barn, but I met Jack Shea just before that. And of course Jack wanted to stop and talk. ‘Where the heck are you going in such a hurry?’ Jack asked. So I stopped and talked for a few minutes and then I went on. The Kelly’s had two dogs, one was a German Shepard and the other an English bulldog, who usually met you when you are coming up to the entrance between the house and the barn. But this time the lad (English bulldog), he wasn’t there. He was just around the corner of the barn. He jumped out and grabbed this horse by the nose. Well, the horse gave one snort out of him and he reared up and came down with his two front feet. Smacko! Nailed him to the ground. And when he came down again, I went like hell.” Albert ended his story with a long, infectious laugh.

“How long would it take you to get to Mount Stewart on the winter road?” I inquired.

“If you had a good horse…10 minutes flat.” Albert responded. “And I had a good horse. Parker was his name. He was named after a famous racing horse. Like I said- part donkey.”

As we ended our tour together that day, I asked Albert one last question just to see what his response would be.

“Albert, did you ever stop into Kelly’s for a drink?”

He looked me square in the eyes and chuckled “No, but there was known to be a few drinks in that house!” And at that I was treated to his infectious laughter once again. Always a pleasure Albert.

So this fall, as we wrapped up the fall mowing of our blueberry fields, we decided to open up the old trail. We hope in the future to line the trail with apple trees, as perhaps they will provide a little shelter from the biting winter winds to the horses and sleighs from winters past that still travel this old road. And maybe someday, if the weather is cold enough, we can recreate the winter road adventure. Does anyone have a horse and sleigh?

Thank you Albert Duffy and Charles Hughes for your patience in dealing with an inquisitive mind. It has been an honor. 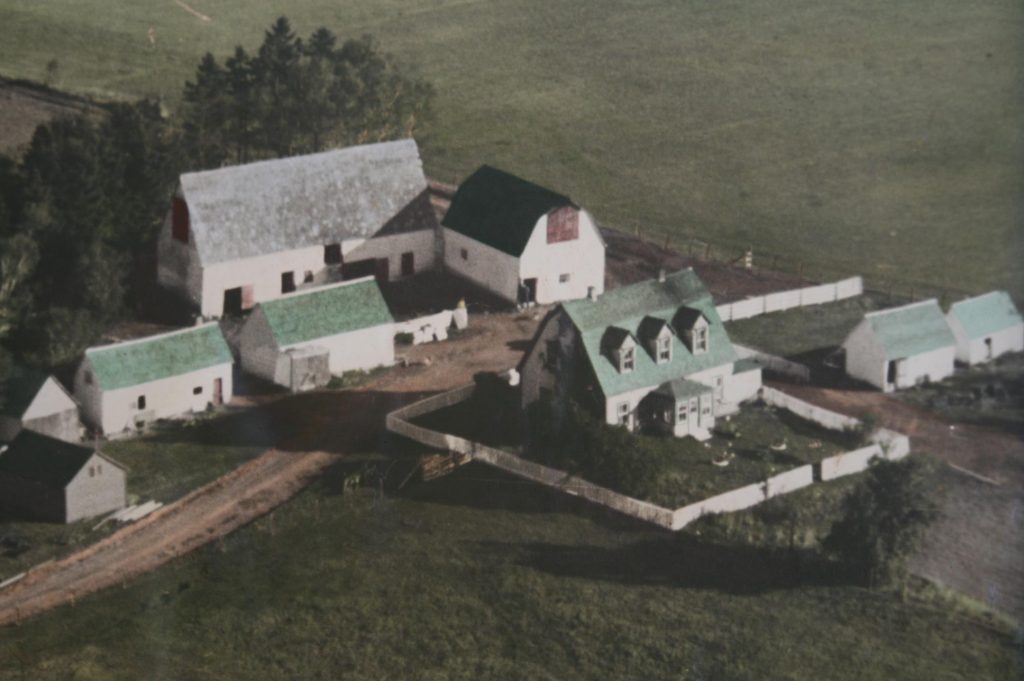